The proliferation of people calling out entitled middle-class white women—“Ok, Karen!”—has reached epic proportions lately. Granted, we’re all a little short on patience these days…what with the Coronavirus pandemic still raging across much of America, civil unrest that some days seems to be bordering on civil war, and a so-called “president” who denies the former and foments the latter. Really, it’s no wonder people are short-tempered. Yet, a lot of this tension seems to be being taken out on middle-aged white women named Karen.

Important Note: I’m not taking issue with calling out women who take their privilege for granted and use it to make life miserable for others. I’m taking offense with hijacking the name itself and turning it into a derogatory term. 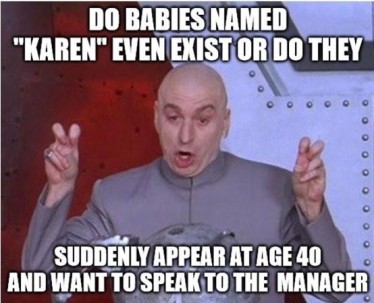 The name “Karen” peaked in popularity in 1965 (the year I was born). As a result, I know a fair number of Karens and, truly, none of the ones I know embody the Let-me-speak-to-your-manager, anti-vaxxer/essential oil, racist soccer mom stereotype. So, when the trend toward labeling these women as “Karen” emerged, I would cringe a little each time I heard it—feeling bad for my friends that shoulder the burden of that moniker while thanking God for my own boring name.

What if we suddenly started calling every racist, “Amanda”? Or every homophobe, “Mackenzie”?

What’s surprising to me is that the negative branding of Karen has largely been at the hands of Millennials and Gen Z. These are the same generations who are quick to defend the underdog in nearly every situation. They’re generally more conscientious about political correctness than previous generations—using the right pronouns, including trigger warnings in their social media posts, and reminding others to not use the “r-word,” “gypsy,” or other violations of courtesy. Yet, the same people who would swoop down in an instant to defend a victim of body-shaming will think nothing of implicating thousands of innocent women whose mothers happened to choose a popular name.

As I mentioned earlier, I have no problems with calling out bad behavior or putting an entitled harpy in her place. If people referenced an odious fictional character in these situations (like using “Scrooge” to describe a cranky old miser), I’d be fine with it. Even the “Okay, Boomer” thing is different, because it’s directed at a whole generation. But to single out one name that so many women share—women who don’t necessarily act in the way that is associated with the name—seems unfair. What if we suddenly started calling every racist, “Amanda” or every homophobe, “Mackenzie”? I think there would (rightfully) be an outcry by the very same people who are so casually branding annoying women as “Karen.”

In the fast-moving world of social media, these kinds of cultural trends come and go rather quickly, so hopefully the whole Karen phenomenon is on its way out. And granted, in a world where black men are being murdered on video, wearing masks has become politicized, and our country’s leader encourages division while committing treason, the hurt feelings of some random women named Karen may not be very important. Those issues are far more serious and more important to solve. Like those Big Important Matters, it helps to put yourself in the other person’s shoes: consider racism from the perspective of a young black man, consider the pandemic from the perspective of an immunocompromised person, consider how your vote could help unite or further divide the country… But unlike those other problems, this one is super easy to fix: The next time you find yourself in a situation where you want to call out some middle-age, entitled white woman who is acting badly, go for it. Just call her by her own given name and leave poor Karen out of it.

EDITOR’S NOTE: After posting this blog, I read a suggestion online that these types of entitled women should be called, “Ivanka.” It’s brilliant. While Ivanka is not a fictional character, a lot of us wish she was—and she embodies entitlement in a way that few others will ever surpass. As far as I’m concerned, Ivanka it is.