“He who owns little is little owned” (Learning to let go…)

I came across this quote by Henry David Thoreau when I was going through a simplification phase in the mid-90s. It struck a chord because I was at a point in my life where I realized that acquiring “stuff” was not the key to happiness.

Let’s back up a bit. Remember that I’m one of nine children and even though my parents did fine by us financially (we had all the basics covered and enjoyed some modest luxuries as well), I frequently heard, “We can’t afford that” as the response to whatever I was asking for. (Looking back, I think it was just my parents’ go-to excuse—not necessarily rooted in lack of finances, but invoked whenever they didn’t want to do or buy something.)

Regardless, my reaction to this childhood “deprivation” was the desire to buy whatever “stuff” I wanted once I had the money and independence to do so. And for a few years, that’s what I did. I’m no candidate for an episode of “Hoarders,” but I have accumulated enough stuff to overwhelm my fairly small home. 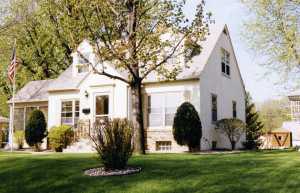 For Sale: 24 years’ worth of memories

I fell in love with my little Cape Cod when I was 25. When we moved in—Mom, Dad and new baby boy—everyone exclaimed, “What a cute little starter house!” They were expecting us to stay in it for a few years and then “trade up.” But I knew we’d be in this house longer than anyone suspected—it looked like where “Happily Ever After” should take place. Although not large by modern US standards, it’s a near duplicate of the house in which 11 of us lived until I was seven, so surely there would be sufficient room for my small family to grow. And there was. That’s not to say that it didn’t become crowded at times, especially during the teenage years, but I believed in what a member of my congregation once observed, “The closest families I know all come from small houses,” and we never traded up to a larger house.

I don’t consider myself terribly materialistic, but over the last two decades, this smallish house has become filled with “stuff.” Stuff that holds memories, stuff that I think my grown kids might need some day, stuff that I feel guilty adding to a landfill, stuff that reminds me that some phases of my life are over.

And it turns out that our cozy house isn’t adequate for the unwelcome guest that arrived 11 years ago and shows no sign of leaving. So, I’ve reluctantly concluded that, as my husband’s Parkinson’s continues to progress, we should find a home that’s more conducive to his lifestyle, with an attached garage, smaller yard, fewer stairs and other features that can make his life easier and more enjoyable. At the same time, if I’m going to leave this home I love, I want to gain some benefits from moving as well—things like a master bathroom and walk-in closet.

Although I’m trying to be optimistic about our next home, the thought of moving is overwhelmingly stressful. Over the last 24 years, we’ve made a lot of home improvements, but there are also a lot of little things we’ve let slide. Dozens of small repairs that need to be made and other tasks that will either fall to me or have to be contracted out. 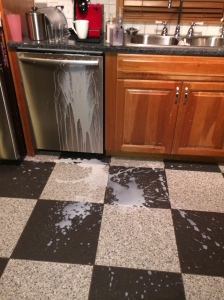 Love me, love my floor (but don’t cry over spilled milk!)

Then there’s the issue of my rather eclectic taste. My home is uniquely me. My husband retains veto power, but gives me a pretty free rein. Consequently, I’ve never really considered other people’s opinions in my decorating choices. But I know that to put my house on the market, I need to tone down certain aspects of my style. For example, I accept that my living room and dining room need to be transformed from a sociable, lively pink (which I spent hours rag-rolling to achieve a very subtle textured effect) to a more crowd-pleasing neutral tone. I also have a lot to do in “de-personalizing” my home, as it’s filled with photos and mementos. However, the new buyers will need to love the gold metallic cove around my ceilings, as well as my checkerboard kitchen tiles as there are some things I refuse to change. After all, I need to ensure my beloved house ends up in worthy hands. 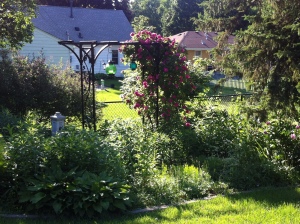 I’ve set a deadline of next spring to put the house on the market, since my little house is most alluring when you can see my great backyard with multiple gardens, two patios and a fire pit. It’s a backyard just made for entertaining and we’ve had some wonderful parties there in the past. I know I’ll miss that yard, but this year as I was pulling weeds in the various gardens I thought, “I’m not really going to miss this part.” So I’m thinking maybe I’ve turned the corner and can now dive into the rest of the process with less sentimentality.

Another important step for me has been renting a storage locker for our excess belongings. I know that to show our house, we’ll need to stage it properly and that requires some extensive decluttering. I don’t want to fall into the same trap my parents did when selling their last home: My mother refused to do any staging and left all of her clutter and outdated décor intact. My parents ended up paying double mortgages for months when the house wouldn’t sell. And a lot of those same musty, dusty items are sitting in my parents’ current basement—waiting to be dealt with all over again. I like to think I can learn from others’ mistakes.

Even so, it’s been difficult for me to part with some of my own stuff, even when I know I’m unlikely to need it again. But when I’m considering what to put into storage, I’ve found it’s much easier to ask myself, “Will I need this in the next year?” than to ask, “Will I want this again at some point in the future?” It seems like about half is going to the trash or charity and the other half is going into storage. And hopefully, when we’re settled in our new place and moving stuff out of storage, the answer of whether to keep X or Y will be much clearer and even less “stuff” will find it’s way to our new home.

It’s a little exciting (and a lot scary) to think that a year from now I’ll likely be living somewhere else. I want our next home to reflect a positive change and a new chapter in our lives, rather than feel like a concession to my husband’s disability. But I know it’s up to me to make that happen. I have to clear out the past to make room for the future. Wish me luck!