Sometimes it’s the simple things that make the biggest difference. Take this summer. It has been here in Minnesota for a few weeks now. (A few weeks late, I might add.) But unlike usual, summer just hadn’t sunk in. It felt like every other day … other than I had different wardrobe options.

Usually summer frees up something in me. All the normal tasks and daily grind get lighter. I feel more carefree. It has always had a magical effect. I feel like I can get through anything as soon as I step outside. I am sure this is enhanced by spending months not seeing blue sky or sun. Summer for me is like Dorothy landing in Oz and everything is in technicolor. But this year, for some reason, summer has just been going by. Maybe it was the late start. Perhaps it’s a busier job with more responsibility. Or worse, another one of those getting older things that I keep learning about (so far none for the better). Whatever it was, summer has been slipping by me.

Last night though, I finally found the fix. I sat chatting with my neighbor as our five-year-olds played in the front yard. Nothing too unusual except it was later than I would normally call it quits. (I’m a stickler for bedtimes. I like my couple of hours a night with no children.) But, they were having such a good time we decided to fight off the mosquitoes and to deal with the crabbiness we knew would be facing us in the morning with over-tired kids.

Finally, heading in at almost 10:00,  my neighbor said, “let’s not let the night end. Let’s walk to Freestyle.”  I went inside to grab my wallet and my son who was reading in bed. “Get up if you want to go get yogurt!”  A frozen yogurt bar with tons of indulgent toppings had recently opened up a few blocks away. The look on my sons face showing cool mom points were scored, and my husband’s eye-rolling suggesting we had sipped on too much wine, made it even more perfect of an idea. Complete spontaneity which always gives me a high. Back outside I was greeted with wine poured into snow cone cups for our walk.

Watching my usually “too cool” son pretend to race and lose with the littler girls, as we headed down, was one of those rare moments you think you did something right as a mom … sibling harmony is elusive in our house. We ran into many neighbors along the way including one of our hockey families, I hadn’t seen since the season ended. All returning from the yogurt shop. The girls loved seeing the teenagers (many of them their sitters) passing by and waving on their bikes as they were headed there to hang out.

The place was packed. I also learned that the owner was an attraction for the 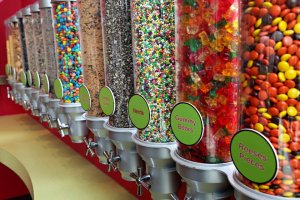 moms of the neighborhood. I still haven’t spotted him myself  but what a great marketing ploy – create a place that draws the attention of both moms and kids.

Walking home in the dark I grabbed my son’s hand, expecting him to pull back which always happens with any sort of public affection. But instead of shaking me off, he spent the rest of the walk blabbering about baseball plays to us and holding my hand the whole time as we watched the girls giggling and running ahead of us.

It sounds simple and silly, probably pretty trivial. But, I finally had my summer kick-off moment. The “Ah Ha” moment I needed to remember to enjoy the perks of the season. A time when nothing seems quite as daunting. Where everything seems brighter. I didn’t need a special moment; I just needed to be in the moment. And it was the simplest things that brought me there.

Now, if I can just hold on to that and apply it to rest of the complicated thoughts swarming in my head.

One thought on “Simple Summer Spontaneity”