A few years ago, KitKat shared a scary Halloween tale of lost socks and lost patience. This year, I have a scary story of my own. A poor rural Chinese family gives birth to a baby boy. This would usually be cause for rejoicing, but this family already has two children—a school-age daughter and a three-year-old girl. Given the political and economic circumstances in China, they aren’t allowed to have three children, so one of them must go. The older daughter is in school and contributes to the household. Due to a centuries-old tradition, the baby boy will be responsible for supporting the parents in their old age. Therefore, the “logical choice” is the precocious preschooler—the girl with the smile like sunshine whose antics make her parents laugh and delight in her warm, open personality. They’re poor and not able to support all of their children. The girl is malnourished despite being well-loved.

The parents are too heartbroken to part with their darling daughter, so her grandparents volunteer to take care of things. They bring her to the train station. With so many people coming and going, nobody will notice a small child left behind. At least, not right away. Eventually a train station official notices the small girl crying on the platform. She’s looking for Lao-ye and Ye-ye and wondering where they are. The station official gives the frightened child a piece of candy and takes her to his office while he calls the local police. He’s hoping it’s a case of a lost child and not an abandoned one, but his heart tells him otherwise. Meanwhile, on the other side of the world, children are going from house to house saying “Trick or treat!” The whole evening is devoted to frightful pranks that aren’t really scary, because they’re only make-believe. However, for the girl back in China, the scenario that’s unfolding is truly frightening.

The girl is taken to the police station where they keep her for three days. They are waiting to see if she is in fact a lost child and merely separated from her family or one of the many unfortunate girls whose family cannot afford to keep her, due to a social system that places responsibility for aging parents on the sons.

After three days in police custody, the officials face the sad fact that nobody is searching for the child. They bring her to the local orphanage where she is given a new identity and a chance for a better life.

KitKat and I are both parents of adopted daughters and the story I just told is my imagined “horror story” of my daughter’s early childhood. Blossom was abandoned on Halloween, so witches and ghost decorations in the stores always make me reflect on this. My daughter turned 21 last November. This is a milestone for any young person, because they are finally recognized as an adult in all respects. But for Blossom, birthdays have always carried a little twist: You see, her birthday was “assigned” to her the day she came to the orphanage.

When we first discovered that, I was a little dismayed. “You mean, we won’t know how old she really is?” I thought. Then, upon reflection I realized this was a pretty trivial matter. After all, she came to the orphanage when she was around three. The orphanage director was a doctor and assessed her as being three years old. In thinking about my (many) nieces and nephews, I realized that the margin of error on predicting a three-year-old child’s age is only +/- six months at best (in other words, you’re unlikely to mistake a six year old for being three) so I figured this was close enough to not worry about it. Her assigned birthday meant she would always be one of the older kids in her class, so that seemed to add a layer of security, ensuring she would be sufficiently mature for the various rites of passage.

Traditionally in China, all children were considered “one year old” at birth and then would age by one year at the lunar new year and on each lunar new year thereafter. So the fact that Blossom’s true age was a little “off” from her celebrated birthday actually seemed to pay homage to her Chinese heritage.

When the orphanage officials brought Blossom in to meet us—her Mama and Baba—for the first time, my immediate reaction was “Oh my God, she’s only two!” Our information had told us she was four-and-a-half, but she was a little peanut and didn’t look older than two. I panicked a bit, because as parents of two other children, we weren’t really expecting to go all the way back to the toddler stage. However, soon after interacting with her, we could see that she was no toddler. For example, she could tie her shoes—and we could tell that she was quite clever in making little verbal remarks (even though they were in Chinese and we couldn’t understand anything she was saying). We asked the orphanage director how confident he was in the age he had assigned to her, and he responded, “She’s four alright—four going on eight!” (referring to her precociousness).

So we had no medical reason to change her birthdate—and I had another more important reason to keep it. With an older “waiting child,” the rules are different than for adopting a typical international baby, thus I had been inquiring into Blossom’s adoption availability, only to be told another family was working on adopting her. For whatever reason, the other couple decided not to proceed, and the day the orphanage called to tell me that she was available to us was on her assigned birthday. So, you see, on that day she was “born” into our family as our next daughter. So in my heart her birthday has always seemed appropriate.

Unlike a lot of adopted children, Blossom has never drilled us for details around her adoption. One of the blessings of adopting a child of another race is it’s a pretty in-your-face move. When you see our family, four Scandinavian Minnesotans with a short Asian girl, it’s clear she’s adopted. Which in many regards, has simplified things. And truthfully, although we’re all well aware that Blossom has a different genetic and cultural background (when her parents are acting too weird, she likes to lord over her 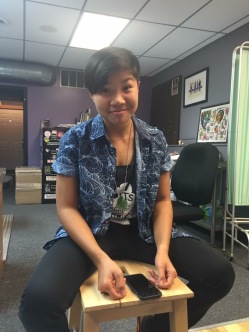 siblings the fact that she’s actually NOT genetically predisposed to the weirdness, whereas they are), we don’t really give it a second thought in our day-to-day lives. I knew I would adopt before I ever had biological children, so she was always part of “the plan,” and we’re very much a regular family with all of the idiosyncrasies that brings. I wish I could tell her birth mom that our shared daughter is living a life filled with opportunity that she never could have imagined on that sad Halloween in China. And Blossom acknowledges the uniqueness of her circumstances by wanting to contribute to the betterment of the world in some way. And I know she will. She already is.

4 thoughts on “A Halloween tale with a happy ending: An Orphan Blossoms in America”