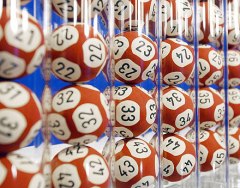 Three weeks ago, unbeknownst to me, the Powerball jackpot reached $600,000,000. This is a lot of dough. However, not being much of a gambler, I wasn’t aware of the hype surrounding the potential payout until a coworker mentioned she was collecting $20 from anyone who wanted to go in on tickets. I just laughed and shook my head.

Now, in the interest of full disclosure, I will let it be known that I have been known to bet on things in the past. Generally speaking, I’ll bet on things like which artist recorded a one-hit wonder or what movie actor started a career on which sit-com. Smarty-pants bets, with the common thread being my desire to prove I know more than my opponent does of matters about which nobody really cares. Often I win, because I have a surprising memory for trivial facts. Occasionally, I lose and have to eat a well-deserved piece of humble pie.

“Italians come to ruin most generally in three ways, women, gambling, and farming. My family chose the slowest one.”

However, I rarely partake in institutional gambling—where it’s simply a matter of me trying to beat the odds against a corporate entity, state government or Native American tribe. I know this type of gambling wouldn’t exist if the house didn’t have the advantage, so it’s easy for me to pass by a slot machine or blackjack table. In fact, during my last trip to Vegas (for work), I didn’t so much as plug the penny slots.

Yet, I was surprised by my reaction to my coworker’s invitation to participate in the pool. Not because I was passing up a bet, but because I wasn’t that enticed by what should have been a tempting jackpot. I realized, much to my astonishment, that I actually have pretty much everything I need—and the remaining things I most desire can’t be purchased with a gambler’s winnings.

This hasn’t always been the case. For many years I thought most of my problems could be solved with more money. Lack of an education? Money for tuition. Lemon of a car? Money for a new one. Lousy job? Seed money for starting my own business. Etc., etc. However, after slowly finishing school and building my career, I now have little debt, a comfortable nest egg, and money for small luxuries and occasional big ones. When I realized how far I’ve come, I felt a sense of accomplishment. At the same time I was concerned: Was my Powerball apathy a sign of depression? Could I seriously not figure out a way to spend millions of dollars?

All around me coworkers fell under the spell of the potential jackpot and ponied up their $20. Even the president joined in. Jokes were made about what a ghost town the office would be on Monday when everyone simultaneously quit. Although I like my job, I eventually succumbed to peer pressure—the jackpot wasn’t the incentive, but holding down the fort as one of the few “left behind” was not an appealing thought.

In the end, 53 individuals joined together to increase their odds of winning by a miniscule degree. And when I challenged myself to consider what I’d do with 1/53rd of the winning jackpot, I actually came up with a few enticing ideas:

I’ll admit that I didn’t really give the lottery a second thought after I dove into the pool, but that’s okay. It’s no secret that we didn’t win, but I didn’t have a shred of disappointment. I decided I was already pretty lucky—I have everything I really need and my imagination is still intact. 🙂