Sometime in my early 30s, I had an epiphany about fear. I had wanted to adopt an orphaned child (not an infant) ever since I was a kid myself, but when I finally got to the stage in my life where I could afford the process, I had doubts. I already had two wonderful biological children and a happy marriage. What if I adopted a kid who was deeply troubled and screwed all of that up? This fear was holding me back.

Meanwhile, a guest speaker at church told us about a mission trip she had taken to work with Mother Teresa in India. I won’t describe the story that changed my perspective (I’m sure it would lose something in my retelling) but the upshot of it was I realized I needed to have faith in a good outcome and plunge ahead despite my fear.

Those of you who have met my daughter Blossom know that I was immeasurably blessed by my leap of faith.

A conscious choice to “Be not afraid”

Fast forward a few years to when my husband was diagnosed with Parkinson’s Disease. A highly individualized illness, some people end up in a wheelchair in five years. Others still work for 15 or 20 years. About a quarter of those diagnosed end up with dementia. There was plenty to fear, but we made a conscious decision to not immerse ourselves too deeply in what “could be” and just focus on what he still could do in the here and now. So far, that decision has served us well, and we’ve been pleasantly surprised by the relatively slow progression of his disease.

I recently was alluding to some challenging family issues, mainly concentrated around my elderly parents, and I’ve determined that the source of these difficulties comes back to this same issue: Fear. My mother is living in fear more and more as she gets older. It’s causing her world to contract and leaving her confused and angry. It’s challenging for her adult children because the fear colors her perception—and our concern about her well-being is interpreted as attempts to take away her freedom.

We have nothing to fear but fear itself… and daycare costs

There are many times our lives require us to overcome our fear in order to move to the next phase: Going away to college, moving out on your own, interviewing for a job, asking someone on a date, proposing marriage, deciding to bring a child into the world, letting your children strike off on their own, learning to trust your adult children, learning to trust that things will work out, and finally trusting that, even when death is inevitable, God is by your side. 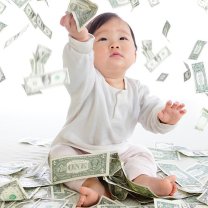 Having a baby is a common example. Many young couples fear the responsibility of parenting. With news articles estimating that it will cost  a quarter of a million dollars to raise a newborn to age 18, it’s no wonder. Yet most of us plow ahead anyway—adjusting our lifestyles along the way—and consider ourselves the richer for it (even while our bank account takes a nosedive). Which brings me to my next point:

Living a fearless life doesn’t mean that you’ll experience smooth sailing from that point on. Some of the things you fear may actually come to fruition. But there is power in forging ahead anyway and usually you’ll find that 1) Most of the time the thing you feared doesn’t actually happen, or 2) On the rare occasion the bad outcome occurs, you’ll cope with it the best you can, learn something in the process and feel even stronger when you emerge on the other side. And because you’re now living a fearless life, you’ll view these episodes as infrequent storm clouds in your otherwise sunny life.

Recent terrorist activity seems to have activated our society’s collective fear response and the result is ugly. The birth of this country was not a fear-based decision. Our forefathers (and mothers) had good reason to fear the quest for independence—after all, one man’s revolution is another man’s treason—but the shimmering ideal of a free nation was too enticing not to move forward despite their fears. Most of us lucky enough to be born in this country are here because we have ancestors that didn’t let fear stop them from leaving their homes behind in pursuit of a better life. As we watch our neighbors react to terrorist attacks by proposing fear-based restrictions on innocent people in the name of “protecting ’Merica” let’s remember that nothing could be LESS American.

One response to “Living fearless”